Facebook has given its Marketplace a bit of a visual overhaul, with new colorful icons and improved search and filtering features. The Craigslist competitor, first launched in October 2016, is Facebook’s major entry point into local commerce. Today, the Marketplace sits in a dedicated tab at the bottom of Facebook’s app, where its ever-present red badge forces you to click through. (Or is that just me?)

The changes are more about making the marketplace easier to use, with a now-scrollable list of item categories that appear as candy-colored, rounded icons.

At launch, Marketplace’s navigational elements were much simpler. Four buttons at the top encouraged users to snap a photo of an item to sell, tap into categories, search or easily access their own postings. 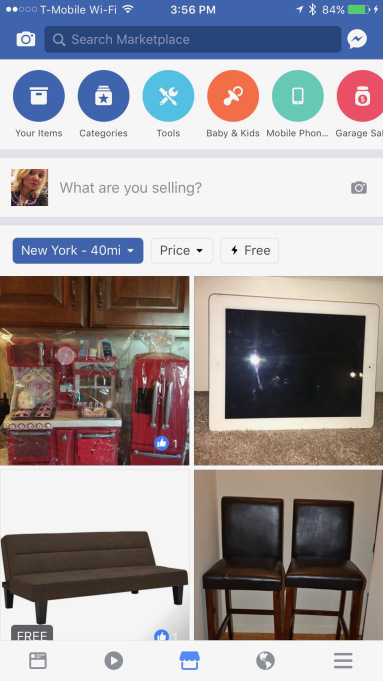 These same features are still available post-redesign, except that, today, delving into an individual category only takes one tap, instead of two. The idea here is to encourage better discovery, as most people come to the Marketplace with a goal in mind. They need a piece of furniture, or an appliance, or they want to browse for deals on second-hand items like clothing, purses, baby products or maybe a used smartphone.

With the addition of the individual category icons, you can now quickly jump into a particular section. Plus, at the front of the list, there’s also now a handy icon for finding nearby garage sales. 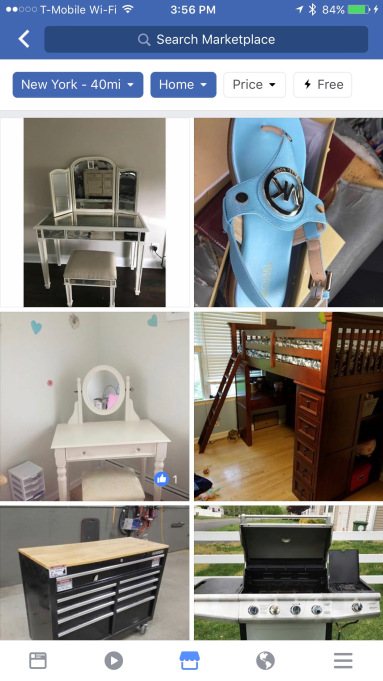 You can filter any section by location and price to narrow the listings returned, either with or without an accompanying keyword search.

When you’re browsing a given section, you also can tap onto the filtering options to switch to a different category. These are organized under high-level labels like Home, Entertainment, Clothing & Accessories, Family, Electronics, Hobbies, Vehicles & Bicycles and Classified. Underneath each is a selection of sub-categories you can choose from to narrow your searches. For example, under Electronics you can pick from Mobile Phones or Electronics & Computers.

The Classifieds section features the Garage Sales, as well as Housing ads — both of which push Facebook even further into Craigslist territory.

These sections, too, now sport the more colorful icons to maintain consistency with the Marketplace’s new look.

These features are available on the desktop version of Facebook, as well as mobile, but in a different layout. 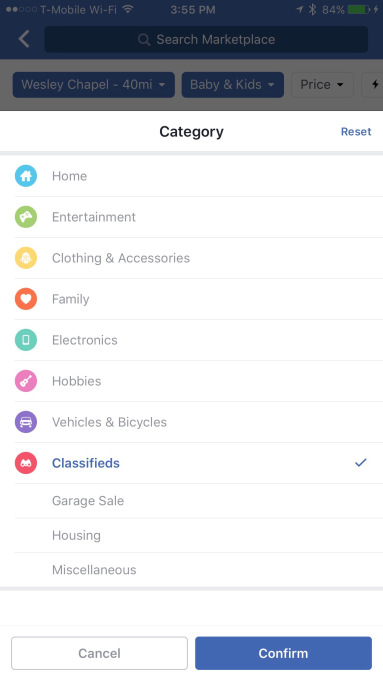 Facebook doesn’t share numbers related to how many users have tried Marketplace, number of listings or transactions to date. However, the company did say last fall that there are 450 million people already using “Buy & Sell” groups on Facebook every month, which is the same demographic that would use the new Marketplace.

But Marketplace still has a host of competition, and not only from Craigslist. A number of new apps are today catering to buyers and sellers. Beyond eBay, there are apps like OfferUp, LetGo, Mercari and Close5 (also eBay). With so many options for buying and selling, Facebook needs to make Marketplace the simplest and most accessible for its users, or they may turn elsewhere.

(But seriously, it needs to drop that annoying red notification badge in the app. We get it, Marketplace exists.)

Facebook confirmed the redesign’s launch and says it’s now appearing to everyone who has Marketplace.