We’ve long thought that the Apple MacBook Air, with its combination of portability, performance, and good looks, is the ultimate everyday laptop. If only it were paired with the Retina display of its MacBook siblings. But the Air hasn’t had a meaningful upgrade since 2015, causing the spotlight to shift over to the MacBook and MacBook Pro, and now, the Microsoft Surface Laptop (starts at $999, $1,299 as tested). Microsoft has given us almost exactly the hardware we’ve been wanting in a thin, light, powerful, and good-looking general-use notebook. Preloaded with the student-friendly Windows 10 S, this ultraportable laptop is made to be carried around campus.

The sleek design of the Surface Laptop fits nicely into the line that also includes the 2-in-1 convertible Surface Pro and the high-end Surface Book. It’s made of aluminum, but with Alcantara fabric covering the palm rest and in the spaces between the keys. It feels luxurious, fitting since it’s the same material used in Audi and Lexus sports sedans. We could see this material getting dirty fast in the wrong set of sloppy hands, though. The laptop is available in four colors: Burgundy, Cobalt Blue, Graphite Gold, or Platinum (like our test unit); the keyboard is a lighter shade of the respective outside hue. (Worth noting is that the base model is only available in Platinum. You’ll have to choose an upgraded version for one of the other colors.) Measuring 0.57 by 12.1 by 8.8 inches and weighing a feathery 2.75 pounds, this laptop is a snap to tote across campus. It’s a bit heavier than the notoriously slight LG Gram 13 (2.01 pounds) and LG Gram 14 (2.09 pounds), but it feels significantly more sturdy than both.

The 13.5-inch PixelSense touch display has a higher-than-full-HD resolution (2,256 by 1,504) with a 3:2 aspect ratio, so its capable of displaying multiple documents on screen, along with photos and video at high levels of detail. It has a higher-resolution screen than the New Razer Blade Stealth$899.99 at Amazon (2,560-by-1,440, or QHD), as well as the HP Spectre 13$767.18 at Amazon, which has a full HD (1,920 by 1,080) screen. While the Apple MacBook Air is still a nice laptop, its 13-inch 1,440-by-900-resolution display feels antiquated by comparison. Like the other Surface devices, the screen is covered in Gorilla Glass 3, which protects it against scratches and the occasional hard knock. Screen brightness and text smoothing are excellent. 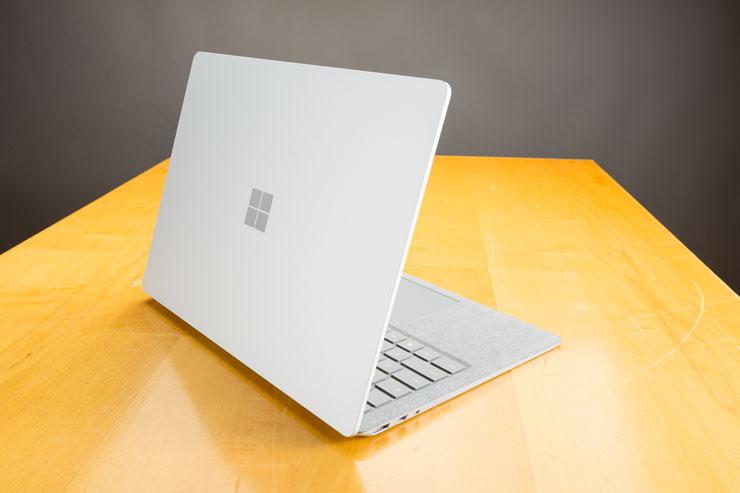 Any Input Device You’d Like
The Surface Laptop works with the Surface Pen, the Surface Dial$85.81 at Amazon, and standard Bluetooth devices like mice and keyboards. We had fun marking up web images and videos using the optional Surface Pen ($99), but it also works with the $59 Pen from older Surface devices. When not using the Pen, the one-piece touchpad supports multitouch gestures, or you can simply use the responsive screen with your fingertips. The backlit, chiclet-style keyboard feels even more comfortable and reactive than the one on the Surface Book, signaling that Microsoft has addressed reports of the latter’s somewhat mushy keys. The speakers are also impressive: They get quite loud and vocals are crisp, and sound quality is maintained at high volumes. There isn’t a ton of bass, but for a small machine, it puts out loud, clear sound.

Connectivity is good, though not excellent. On the left edge, you’ll find a headset jack, a mini DisplayPort, and a USB 3.0 port. On the right, there’s a single SurfaceConnect jack for connecting to the included AC adapter or the Microsoft Surface Dock ($199). There’s also a USB port on the AC adapter for charging phones or other devices. Notably absent is USB-C. It’s shortsighted, since USB-C is the future of wired connectivity. 802.11ac Wi-Fi and Bluetooth 4.0 are on board to handle wireless connections. 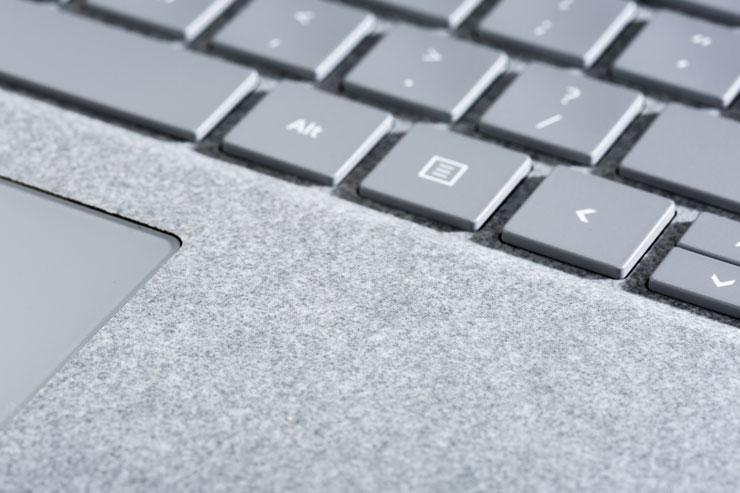 The laptop comes with Windows 10 S preloaded. This iteration of the operating system is compatible with any app in the Windows Store, but you can’t run third-party Windows programs or use a browser other than Edge unless you convert to Windows 10 Pro. This locked-down version of Windows keeps users from inadvertently installing malware, a plus for school administrators who want to ensure the integrity of their hardware. Educators can upgrade to Windows 10 Pro for free. Other users who purchase the Surface Laptop can upgrade for free until Dec. 31, 2017, after which it will cost $49. Windows 10 S works well for supporting school IT policies, but users who want more flexibility should note that it only takes about 10 minutes to convert the laptop to Windows 10 Pro online, which is well worth the time.

The base $999 model comes with 4GB of RAM, a seventh-generation Intel Core i5-7200U processor with integrated Intel HD Graphics 620, and a 128GB solid-state drive (SSD). Our upgraded $1,299 model uses with the same processor, but with double the RAM (8GB) and storage (256GB SSD). These specs can be upgraded individually up to 16GB of RAM, a Core i7 processor, and a 512GB SSD, but a fully loaded model will cost you $2,199. Microsoft backs the Surface Laptop with a one-year warranty.

All About That Battery

Considering the components that the Surface Laptop is packing, it was unsurprisingly competitive on our benchmark tests, including PCMark 8 Work Conventional (2,718 points), Handbrake (2:13), Cinebench (324 points), and Photoshop (4:14). Take a look at our benchmark charts below for the formal breakdown, but suffice to say that the Surface Laptop is faster than the HP Spectre 13 and the LG Gram 13$899.99 at Amazon on the multimedia tests, though it was a smidge behind those two laptops on PCMark. The LG Gram 14$1,397.00 at Amazon and the New Razer Blade Stealth were the fastest at the PCMark and multimedia tests overall, thanks to their Core i7 processors. If you must have Core i7 performance on a Surface Laptop, it’s available for $300 more. 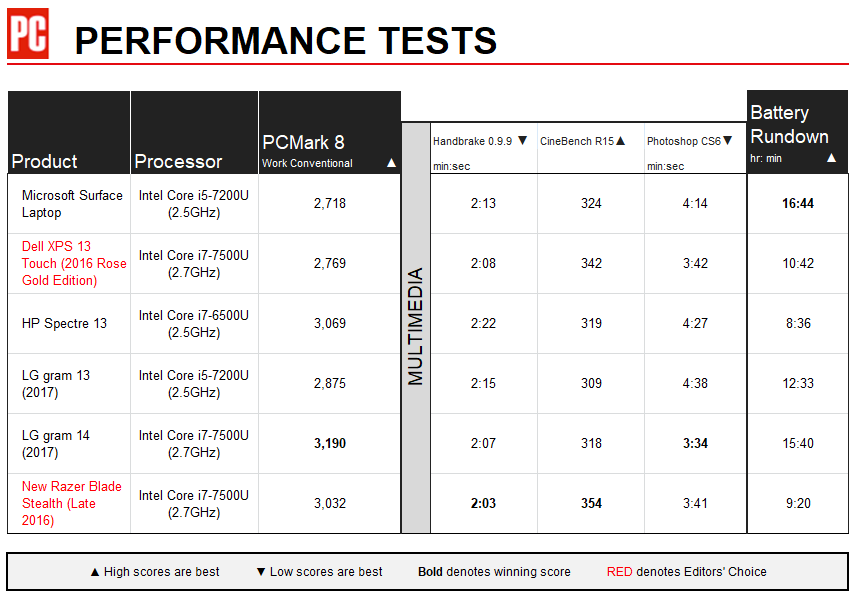 3D performance is good for the category, but given the integrated graphics, you won’t be doing any intense gaming on this machine. It reached 22fps (frames per second) on our Heaven test, and 27fps on Valley. Both are shy of the 30fps we consider the threshold for smooth gameplay, but you could achieve it by reducing the screen resolution from 1,366 by 768 or quality settings from medium, which are our test standards. The system has enough power to play games like Minecraft, Diablo III, and most browser-based MMO games.

The Microsoft Surface Laptop is an aesthetically pleasing midrange ultraportable laptop with admirable performance and class-leading battery life that should suit most college students just fine. If you’re going to make the purchase, though, do it for fall semester before time runs out for the free upgrade to Windows 10 Pro

With its sleek aluminum design and light weight, Microsoft is pitting the Surface Laptop squarely against Apple’s line of MacBooks. If macOS is more your thing, you can get a similarly outfitted entry-level MacBook Pro for the same price as the Surface Laptop we tested, although you’ll have to sacrifice some storage and connectivity to stay in that price range. The base-level MacBook also starts at $1,299, but packs a less-powerful 1.2GHz Intel Core m3 CPU, though it weighs less at a cool 2 pounds.

If the Surface design is appealing but you’re not ready to shell out more than a grand, the Surface Pro is a powerful alternative that offers the flexibility of its detachable keyboard for as little as $799.

Meanwhile, the Core i7-powered version of the New Razer Blade Stealth remains our Editors’ Choice for midrange ultraportables for its faster performance and wealth of features, all for $400 less than our upgraded Surface Laptop.