The Best Free Antivirus Protection of 2017 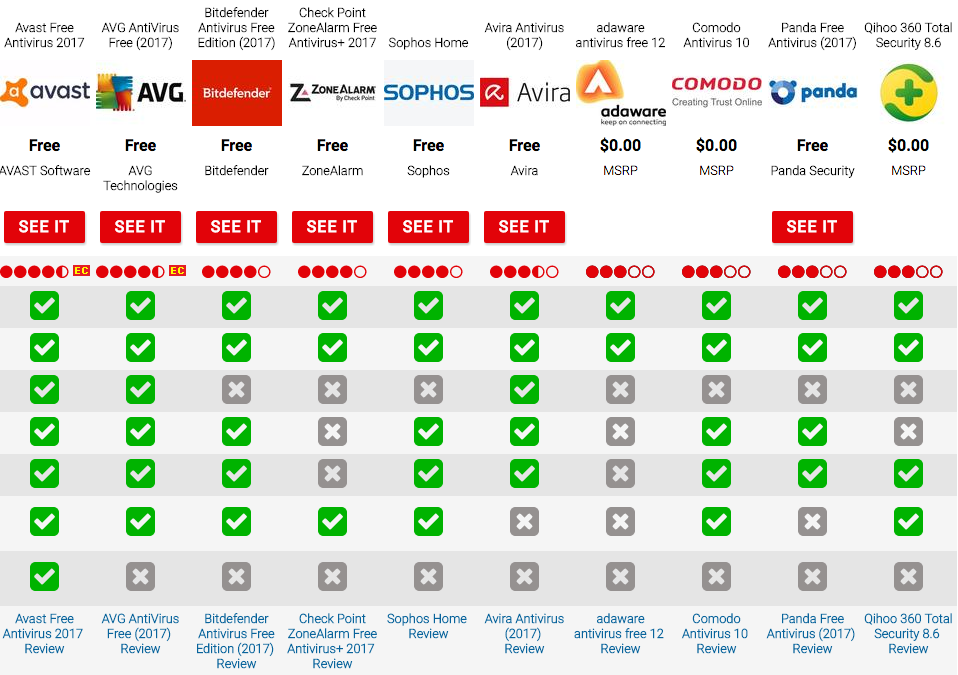 As the saying goes, the best things in life are free. But another saying tells us that you get what you pay for. Which is right? I can’t offer a universal truth here, but in the antivirus realm, it’s definitely the first saying. Some of the utilities offered for free outperform all but the best of their premium cousins, as proven by independent lab tests. We’ve evaluated 15 free antivirus utilities so you can pick the free antivirus utility that suits you best.

Quite a few of these products are free only for noncommercial use; if you want to protect your business, you have to pony up for the paid edition. At that point, you should probably consider upgrading to a full security suite. After all, it’s your business’s security on the line.

Your antivirus should definitely have the ability to root out existing malware, but its ongoing task is to prevent ransomware, botnets, Trojans, and other types of nasty programs from getting a foothold. All of the antivirus programs in this collection offer real-time malware protection. Some take the fight upstream, working hard to ensure you never even browse to a malware-hosting site, or get fooled into turning over your credentials to a phishing site.

Around the world, researchers at independent antivirus testing labs spend their days putting antivirus tools to the test. Some of these labs regularly release public reports on their findings. I follow five such labs closely: AV-Comparatives, AV-Test Institute, Simon Edwards Labs (the successor to Dennis Technology Labs), Virus Bulletin, and MRG-Effitas. I also take note of whether vendors have contracted for certification by ICSA Labs and West Coast Labs.

Security companies typically pay for the privilege of being included in testing. In return, the labs supply them with detailed reports that can help improve their products. The number of labs that include a particular vendor serves as a measure of significance. In each case, the lab considered the product important enough to test, and the vendor felt the price was worthwhile. The labs don’t necessarily test a vendor’s free product, but most vendors pack full protection into the free product, enhancing premium versions with additional features.

In addition to carefully perusing results from the independent labs, I also run my own hands-on malware protection test. I expose each antivirus to a collection of malware samples, including a variety of different malware types, and note its reaction. Typically the antivirus will wipe out most of the samples on sight, and detect some of the remaining ones when I try to launch them. I derive a malware blocking score from 0 to 10 points based on how thoroughly the antivirus protects the test system from these samples.

Since I use the same samples month after month, the malware-blocking test definitely doesn’t measure a product’s ability to detect brand-new threats. In a separate test, I attempt to download malware from 100 very new malicious URLs supplied by MRG-Effitas, typically less than a day old. I note whether the antivirus blocked all access to the URL, wiped out the malicious payload during download, or did nothing. Norton holds the current top score in this test, followed by Avira Free Antivirus.

If you’re interested in learning more about my testing techniques, you’re welcome to read more about how we test security software.