We’ve been dreaming about turning phones into PCs for years. It makes sense: We’re carrying around little computers in our pockets, so why not use them when we need to do actual computing? Samsung’s $149 DeX dock transforms your Galaxy S8 or Galaxy S8+ phone into a desktop computer when you attach a monitor, keyboard, and mouse. It gets closer than other solutions we’ve seen to nailing the experience, but it still falls into the uncanny valley of not being quite as capable as a real PC.

DeX $179.00 at Amazon only works with the Samsung Galaxy S8 and Galaxy S8+. The key hardware is the DeX Station itself, which looks like a black ashtray. You slide back the top to reveal a USB-C port that you plonk your phone onto. On the back, there are two USB-A ports for keyboards, mice, and storage, as well as an Ethernet port, a power jack, and an HDMI port for monitor output at 1080p. The DeX experience requires a monitor; without a monitor plugged in, the dock doesn’t kick into DeX mode.

Unlike with Microsoft’s Continuum, your phone doesn’t work as a second screen with DeX. Instead, the screen stays off when it’s in the dock. For audio you’ll want Bluetooth headphones, as the dock blocks the phone’s headphone jack.

Pop your phone into the dock and it enters DeX mode, a desktop interface complete with application icons on your home screen, a task bar, and a status bar. You can put your favorite apps on the home screen and control settings through the status bar. You can also open and proliferate windows—I switched between eight at a time with no problem, although apps in the background will slow or stop running until they’re brought back to the foreground. 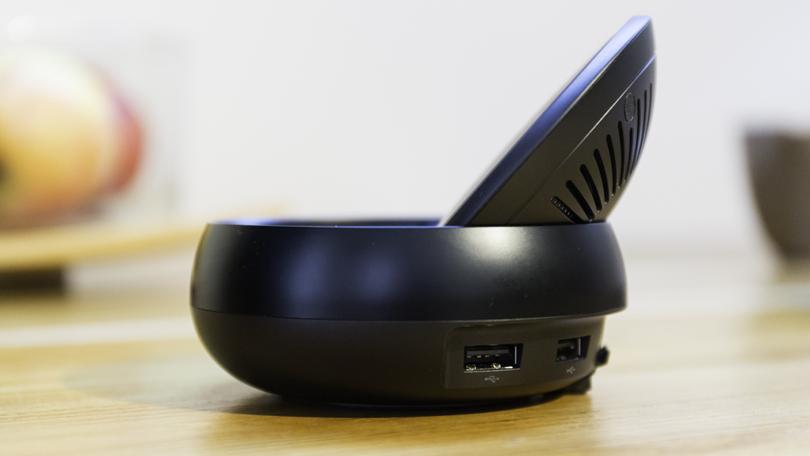 Can DeX Do the Job?

I spent two days trying to work on DeX, periodically turning back to my Surface Book when I encountered something the Galaxy S8 couldn’t do.

Microsoft Office apps are the system’s glory. They’ve become quite functional on Android in the past few years, and they’re optimized for resizable windows on DeX. I’m writing this in OneNote right now, and earlier I built a perfectly functional Excel spreadsheet with a bunch of string concatenation and time math functions in it.

But when you get really serious about either work or play, you’re going to have to ditch the DeX. My current project involves MySQL, and MySQL clients on Android are forced into tiny, cramped windows here. After building my spreadsheet, I wanted to export it as a tab-delimited text file—but Excel on Android doesn’t do that. There’s no great, desktop-class image editing solution, either.

Samsung says it’s working with virtualization companies like VMWare and Citrix to enable virtual desktops for full Windows 10 through DeX, but I’d warn that when I’ve used those in the past (on HP’s Elite X3), it’s been a recipe for serious frustration because of input lag.

My daughter’s schoolwork, meanwhile, requires Flash, which isn’t available on DeX. Both the Chrome browser and Samsung’s custom browser download and show desktop-format sites, which is great until you need desktop browser plug-ins. For entertainment, Hulu and Netflix are stuck in small windows. And gaming is pretty sluggish.

So DeX isn’t a true desktop experience—not because of the hardware, but because Android still doesn’t measure up to Windows 10 in a desktop context. I’d be more likely to want to use a DeX-like solution on the road, taking notes in daylong, off-site meetings with an always cloud-connected phone, for instance.

But DeX isn’t appropriate for mobile workers, because of all the pieces you have to tote around. You’re not going to set up all of these disconnected bits (your phone, the dock, a monitor, and a keyboard and/or mouse) in a meeting. Hooking it up to a hotel TV will likely present neck-craning ergonomic problems, because hotel TVs usually aren’t in the right place for you to sit in front of them and do your work.

There are also some small, but noticeable bugs. For example, you can’t copy text out of Gmail messages, which is just crazy. The keyboard driver also kept dropping spaces, irritatingly. 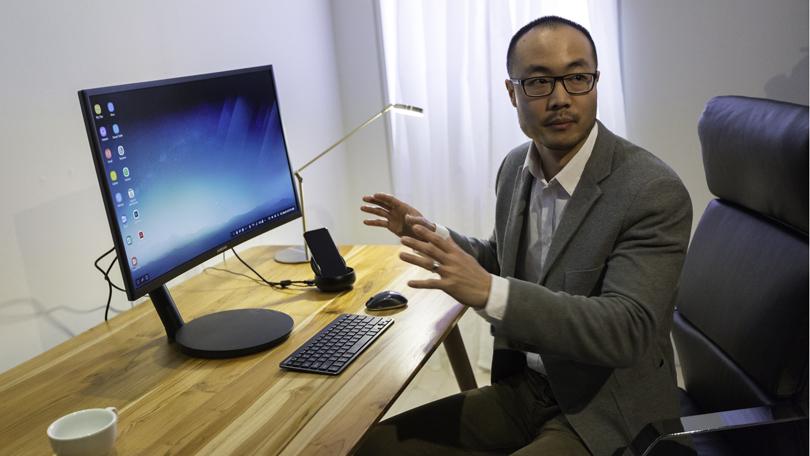 DeX works; it’s a great technology demo. But I’m stymied trying to figure out exactly who it’s for. The best I can guess is IT departments in larger enterprises that don’t want to have to manage more devices. But even there, it feels like a stretch.

The system’s problem is that it’s competing against a rich, inexpensive, and very functional marketplace of desktops and laptops. DeX needs not just a $149 dock, but a keyboard and mouse (let’s say $50) and a monitor (another $100). Now you’re up to $299, plus your phone.

You can get an HP 20-c010 all-in-one desktop for $349, which does far more than DeX does. If you have an existing monitor, keyboard, and mouse, the Shuttle XPC Nano is only $259. Students, meanwhile, may be better served by a Chromebook, that they can carry to classes and tote from room to room.

I congratulate Samsung for making DeX work, but I can’t actually recommend this solution to anyone. DeX’s main competitor in this mobile-to-desktop space is Microsoft’s Continuum, which is on life support, with a steadily shrinking array of apps. It’s been practically abandoned and isn’t worth considering.

Samsung proved it can do DeX. What it really needs now is LeX—a laptop dock with a built-in screen and keyboard, that leverages the fact that when you’re away from home, you’re much more likely to do primary computing on your phone than when you’re at home or in the office. If it was the price of a Chromebook but significantly more powerful thanks to the Galaxy S8’s considerable juice, it could be a great solution for both mobile workers and students.